Ivan Skanavi was born in Moscow in 1996. He began to play the cello at the children’s department of the Moscow Conservatoire’s Music College, eventually continuing at the Music College itself. Currently, he is completing his studies in the class of Wolfgang Emanuel Schmidt at the "Hochschule für Musik Franz Liszt" in Weimar. In addition, he took part in master classes of David Geringas, Claudio Bohórquez, Boris Andrianov, Denis Shapovalov, Ivan Monighetti, Jerome Pernoo, Torleif Tedéen and Natalia Gutman.

He won prizes at youth competions in Tallinn 2009, Saratov and Montreux 2012, and a scholarship from the Russian Ministry of Culture as a winner of the "Young Talents of Russia" — Competition, 2009. He receives a scholarship from the International Academy of Music in Liechtenstein and participates regularly in the intensive music weeks and activities offered by the Academy. He has played in the Moscow Conservatoire’s subscription series "Music Dynasties", at the Festival "I Mozartini" in Italy, and at the Rostropovich Festival in Baku. 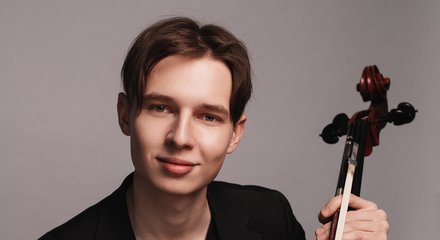