Began his music studies at the age of twelve at the Music School №1 in Talovaya. Became a laureate of the Pifferari All-Russian Open Competition for Winds at the age of thirteen. In 2008 was admitted to the Gnessin College (class of Prof. Vladimir Shish). In 2011 joined the New Life Brass ensemble named after Timofei Dokschitzer. Won the first prize at the All-Russian Music Competition as a member of brass quintet. In 2012 became a laureate of the II Dokschitzer International Competition.

In 2013 he became a Yamaha artist. A soloist of the State Symphony Capella of Russia under the baton of Valery Polyansky. 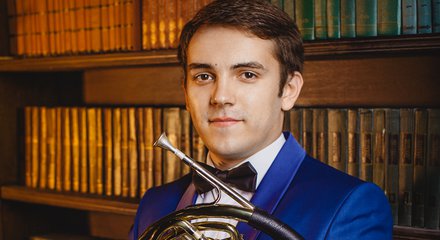