Studied at Gnessins’ Special Music School in Moscow and Turku Music Academy in Finland under Prof. Alexander Vinnitsky. She had an internship at Folkwang University under Prof. Boris Garlitsky. Anna earned her bachelor of music degree at the Tchaikovsky Moscow State Conservatory, where is currently pursuing her postgraduate diploma (class of Prof. Vladimir Ivanov).

Was awarded top prizes at many prestigious violin competitions, including the Louis Spohr in Germany, David Oistrakh in Russia, Heino Eller in Estonia, Andrea Postacchini in Italy and many others. Twice prizewinner of the Sendai Competition in Japan in 2013 and 2016. Participated in master classes with Pinchas Zukerman, David Chan, Wolfgang Redik, Pierre Amoyal, Cho-Liang Lin. As a soloist toured in Europe, USA, and Asia. 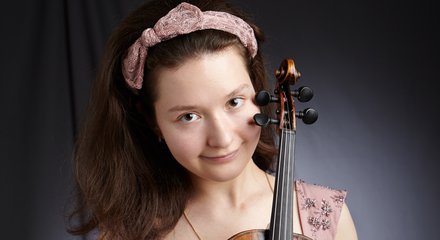