He began his musical studies at the age of six. In 2012 he graduated from the Vocational Music School in Sulzbach–Rosenberg (Germany), under the tutelage of Ruthard Göpfert. Since 2014 he is studying at the Hochschule für Musik und Theater München under the direction of Prof. Josef Steinböck.

During his studies he has been playing with renowned orchestras such as Mozarteum Orchester (Salzburg, Austria), Münchner Symphoniker (Germany), Niederbayerische Philharmonie Passau (Germany), Philharmonisches Orchester Bad Reichenhall (Germany). Since April 2018 he is part of the Academy of the Munich Philharmonic Orchestra.

For 15 years he has been a member of the brass trio called Die Fexer, which cooperates with 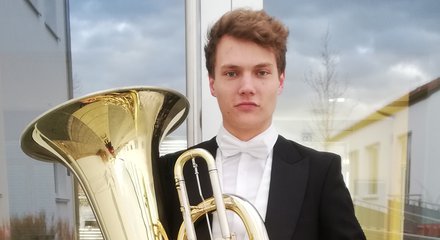