Graduated from the Conservatoire national supérieur de musique et de danse de Paris where studied with Laurent Lefèvre and Fany Maselli. In 2015 he was accepted to the Karajan Academy of the Berlin Philharmonic where he studied with Stefan Schweigert and toured for two years.

A laureate of international competitions. Regularly performs as a guest principal bassoon with major orchestras such as the Royal Concertgebouw Orchestra Amsterdam, the Orchestre National de France, the City of Birmingham Symphony Orchestra, the Rotterdam Philharmonic and other ensembles.

Since September 2017 he has been a principal bassoon of the Brussels Philharmonic. He is also a member of the Verbier Chamber Orchestra. 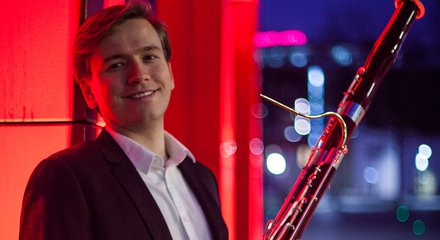