In 2011 he completed his Bachelor's degree in classical trombone under Prof. Branimir Slokar. Three years later, he received the Master in performance with distinction. In 2016, he gained a Master's degree in pedagogy with honors from the Zurich University of Arts.

He participated in various master classes and won numerous prizes at national and international competitions. At the age of 14, he became the overall winner at the Swiss Solo and Ensemble Competition in Langenthal. Further successes include the first prize at the Prix Musique 2008, as well as the first prize with distinction at the Swiss Youth Music Competition 2009. In 2015 he won the first prize at the ITA Competition in Valencia. As a soloist, he has performed with orchestras such as the Zurich Chamber Orchestra, the Danish Concert Band, the Aulos Wind Orchestra and the Harmonie Shostakovich. In 2010 was released his first solo CD called Crossways.

In November 2012 was invited to a recital in London. Since 2013 he has been an official artist of the S.E. Shires company. Since 2015 he has been an assistant principal trombone in the Philharmonia Zurich (Orchestra of the Opera Zurich). 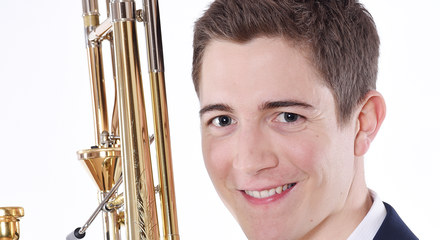